So many individuals are beyond enraged at the actions of officer Darren Wilson. Many believe that he committed an unforgivable act. To kill…to murder someone in cold blood. But I would like to propose a thought. Many Americans and individuals worldwide are murders at this point.

The bible says… “Anyone who hates his brother is a murderer and you know that no murderer has eternal life in him” (1 John 3:15).

My heart is completely saddened at the expressions and acts of hate that this whole situation has brought about. According to the word of God, there is NEVER a valid excuse or reason to hate someone and to act upon that hate. The same actions of hate officer Wilson may have acted with, or the same label of “murderer” that many individuals have labeled officer Wilson with is the same label that God has labeled them with… “murderer”. Hating Wilson, or the jurors, or the courts is not going to fix the situation.  Please don’t misunderstand what I’m saying. I’m not excusing the wrong of Wilson or of Mike Brown or of anyone else in the situation, but I will not support wrong, even if it’s supposed to be for “a good cause.” It’s not about taking sides. This issue is so much deeper than what is it. It’s so much more than a “white police officer shot a black kid.” It’s so much deeper than a race and color issue. It’s so much deeper than a kid that chose not to obey authority. This is a SPIRITUAL ISSUE! We need to WAKE UP. At the heart of racism, at the heart of killing, and at the heart of disrespect is HATRED AND A LACK OF LOVE. That’s where the problem first began and that is where it will end. I will say it again.

This world is in dire need of Jesus! We are all sitting at the mercy of God and are in need of His continual forgiveness…even officer Wilson.  It doesn’t matter how bad someone disrespects us, calls us out of our name, how bad someone doesn’t like us because of the color of our skin,  how bad someone has hurt us, or even if someone harmed or killed one of our loved ones.  God STILL commands us to love and to forgive.

I encourage everyone to always seek to see things through spiritual eyes. This whole situation is a complete tragedy but God wants us to use everything no matter if it’s a joy or a tragedy for the betterment of our spiritual good and ultimately for God’s redemptive good. Let God be God and let us be and act like His children. We should use this as source of promoting the love of God and growing spiritually within ourselves and as a result promoting  that for the whole world. This is a chance for spiritual growth not hate to take place. Love works best when it’s put to the test. The crucifixion of Christ was the biggest tragedy of all time but the biggest gift to the world at the same time. This is a chance for America and for our world to come together.  Seek to love not hate. Do not be deceived by our enemy the Devil. He wants us not to pass the test. I believe we can if we decide to choose love over hate! #BeEncouraged #SaidWithLoveNotHate

“For we wrestle not against flesh and blood, but against principalities, against powers, against the rulers of the darkness of this world, against spiritual wickedness in high places…” (Ephesians 6:12) 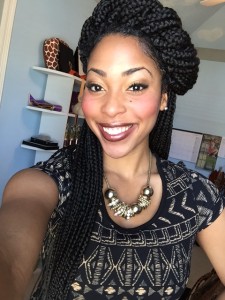 The CONSEQUENCES of Sexual Sins

Powerful my Sister in Christ! I often say this very thing in my sermons, see the situation with spiritual eyes, not physical ones. The negative is right before us and we refuse to look through our spiritual eyes which will show us that GOD has made us stronger on the other side!