Far Beyond Our Ability to Endure

Far Beyond Our Ability to Endure 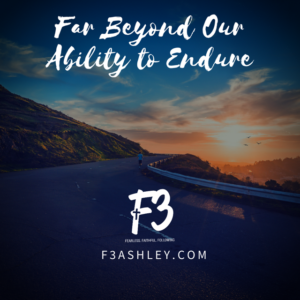 One of my favorite persons in the bible is Paul. His story, his journey… is beyond encouraging. He is someone that understood the struggles and hardships of the Christian life. He used his sufferings and moments of despair as a means to encourage others. I’m so thankful to God for using Paul through the word. In particular, I love the passage in 2 Corinthians 1:8-10 because both you and I can learn and be greatly encouraged from it.  A few things stick out to me.

“We do not want you to be uninformed, brothers, about the hardships we suffered in the province of Asia. We were under great pressure, far beyond our ability to endure, so that we despaired even of life. Indeed, in our hearts we felt the sentence of death. But this happened that we might not rely on ourselves, but on God, who raises the dead. He has delivered us from such a deadly peril, and he will deliver us. On him we have set our hope that he will continue to deliver us…”-2 Cor 1: 8-10

1) In verse 8 Paul states, “We were under GREAT pressure FAR beyond OUR ABILITY to endure.” This lets me know that even Paul experienced moments where he felt that he could not endure. He felt he couldn’t take what was presently happening to him. He believed it to be far beyond “his ability.” Have you ever experienced anything in your life that allows you to relate to Paul? Have you ever felt as though you couldn’t take any more of what you were going through?

2) In verse 9 he states, “In our hearts, WE FELT we had received this sentence of death.” Paul even felt that he knew he was going to die or that it was the end. He was convinced in his mind that it was over. Have you ever felt like that, maybe not physically, but emotionally? Have you ever felt as though your situation was hopeless? That it is the end for you?

3) As verse 9 continues…he went on to say, “BUT this happened that we might not rely on ourselves but RELY on GOD.” Paul understood that what he was experiencing was happening for a reason. The greatness of his despair is what caused him to rely on God and not on himself. He realized in the midst of his trial that this is where God always wanted him to be, totally dependent on Him.  Has the greatness of your distress ever caused you to depend on the only one who is dependable? Or are you still trying to rely on your own strength?

4) Verse 10, “He HAS DELIVERED us from such a deadly peril and He WILL DELIVER us.” This lets me know that Paul testified about God’s past deliverance therefore he was confident in his current distress that God would without doubt deliver him from this one. Take time to travel down your spiritual memory lane and ask yourself, what has God delivered you from in the past? If you know God has delivered you in past times, do you believe He has the power to deliver you from your current situation?

5) Verse 10 goes on to say, “On HIM we have set OUR HOPE that he WILL CONTINUE to deliver us!”  Paul realized that his hope was not in himself or his circumstance but in God. And because of this hope he was confident in God’s future deliverance in his life. He knew that no matter what he faced God WILL continue to deliver him. Have you set your hope in God or on your circumstance? Do you believe he will continue to deliver you no matter what you go through?

This passage has helped me realize in the midst of what I’m going through there will be moments where it feels as though I can’t endure anymore. You and I will go through moments like that.

The pain we feel may be so great it appears unbearable.

The grief may feel like it is so sorrowful,

that it is beyond our ability to endure it.

The loss may be so great it appears that nothing can replace it.

Although we may “feel” like that, it is God who has allowed things to press, weigh, upon us so greatly in order that He may teach us not to rely on our own strength but on His. Our trials in life always causes us to end up exactly where God wants us to be; at His throne in need of His strength. This passage has also helped me realize that God’s past deliverance can build confidence for our current hardships.

When I reflect over everything I have been through and see the amazing hand of God over it, it encourages me to remember God’s love for us and His constant presence in our life. We can be confident that God has the power to deliver us this VERY moment from any adverse circumstance. If we are experiencing a moment of discouragement, God’s power has the ability to raise us up out of our sadness and completely deliver us!  This passage also reminds me that as long as my hope stays in God I can live life in hopeful expectation knowing that I will experience the deliverance of God over and over again. How encouraging it is to know, that even when life feels like it’s beyond “our ability” to endure, because of God’s love for us, His power, and His ability, we WILL be able to endure.

HE supplies us with endurance.

Glory to His name!

Life is not about Being Single or Married

Your Biggest Problem Is Already Solved


6 Comments On Far Beyond Our Ability to Endure

Great stuff Ashley! Thank you for the reminder and the encouragement! 😊 GOD bless always.

Thanks Stephen! So glad God was able to use me to encourage you. To God be the glory!

You writing has great spiritual strength, wisdom and encouragement! I am encouraged by your wisdom and conviction. I can testify that God will see me through trials, tests, and tribulations. He is my anchor and my strong hold when storms arise in my life.

Thank you Aunt Lydia! Amen to everything you said! To God be the glory!

Thank you Ashley for the encouragement and the constant reminder that God makes no mistakes. God puts us thru certain situations to teach us a lesson and to show us he will never forsake us …. I love the blogs and the weekly encouragement thank you Ash and keep up the excellent work .

Awww thank you so much cuz! I’m so glad God has been able to use me to encourage you. To God be the glory! May you continue to stay strong in the Lord! Love you!